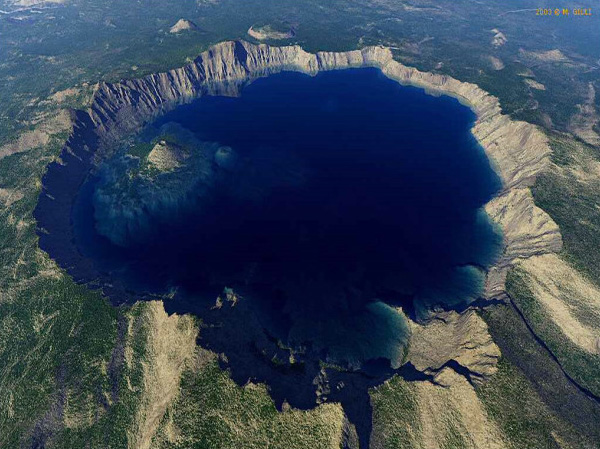 Crater Lake is arguably one of the most famous lakes in America due to its beauty and uniqueness.  The lake is located on a mountain and does not have any river inlet or outlet.  Visitors from all over the country frequent the campgrounds near the lake to experience this marvel of nature.

People planning on visiting the site should know its geological history to appreciate its beauty and magnificence fully.

Geological History of the Crater Lake and the Campgrounds near

The lake is the primary attraction feature in Crater Lake National Park, located in Oregon. Two tectonic plates collided in the area, resulting in significant volcanic activity that created the lake.

Crater lake is located on Mount Mazama, which is part of the Cascade Range.  The North American and the Juan de Fuca plates beneath the Cascade Range interacted roughly 500,000 years ago. The latter plate was denser than the former, and it sunk lower into the earth’s surface.

As the dense Juan de Fuca sunk deeper into the earth, high temperatures and pressure forced the less dense materials within the plate to rise as magma. The magma accumulated in large pockets below the earth’s surface.  Similar to a soda can, the magma contained below the ground remained dormant till pressure changes occurred.

A relatively continuous period of volcanic eruptions started at Mount Mazama after sudden earthquakes drastically changed the pressure in the magma chambers. The eruptions were mainly relatively minor, but the continued activity built up to one big climactic explosion that resulted in a giant crater.

This big eruption occurred 7,700 years ago in two main phases.  The first step involved a violent upsurge of rock and ash that shot debris 30 miles up into the air. A large amount of magma flowed from the resulting vent, widening it further. Soon after the magma outflow, the wide eruption column collapsed in on itself.

The second phase created circular cracks around the peak of Mount Mazama. A substantially larger volume of magma escaped to the surface using these cracked rings. As a result, the magma chambers below the surface were left hollow.

The two-stage process created an implosion that sunk the landmass in the middle, forming a caldera. The resulting crater was about 5-6 miles wide and 0.7 miles deep.

The Lake and Surrounding Camping Sites

After the climactic eruption, magma and rocks covered the surrounding valleys. Minor eruptions followed within the crater to form Wizard Island and Merriam Cone. The area’s violent eruptions finally fizzled out, allowing vegetation to grow around the area that are now beautiful camping sites.

The lake also formed soon after. Estimates suggest that the caldera took about 250 years to fill with water from rain and snow. Lake Crater’s water level maintains itself through a combination of seepage, precipitation, and evaporation.

Visitors like camping on the various camping grounds near Crater Lake National Park to explore and appreciate it.  Reputable resorts such as Crater Lake Resort and Store offer affordable accommodation and resources that enable visitors to fully experience the rich history and natural beauty in the area.